Back in the days, elder berries have been used by different folks – from North America, North Africa, Europe and Western Asia – because of its medicinal benefits. In fact, the juice of the elder berry was used in Panama during the flu epidemic in 1995. Since then, the fruit has been used as flu remedy and many people who take it found that they suffered from less severe symptoms and saw themselves feel better much faster. 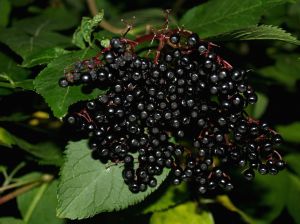 However, the sambucus Canadensis or the American elderberry has also been found to provide more health benefits aside from being used against flu. Another reason why it is becoming popular is its antioxidant abilities, helping one prevent certain types of diseases and, of course, slow aging. They are found to help lower cholesterol levels and improve heart health as well.

The fruit also contains a large amount of Vitamin C, which can help one prevent coughs, colds and flu. In fact, in 2000, it is even listed in Mosby’s Nursing Drug Reference for nasal and chest congestions as well as for yeast infections and hay fever. Elderberry is also good against bacterial and viral infections and tonsillitis.

People with weak immune systems may find comfort in the fact that the Elderberry fruit can help boost it. The fruit produces cytokines that help regulate immune response thus preventing the body against diseases.

If these were not enough, the sambucol is also discovered to be a mild laxative and can act as a diuretic and a diaphoretic, too.

[…] can improve physical activity, performance and presence of mind. Supplement with other antioxidant fruits like cherries and blueberries and with food packed with iodine like seaweeds and seafood. What to […]

[...] We also grow a limited quantity of black currants, black raspberries and have plans to expand into elderberries as well.   What made you decide to grow Aronia [...]