All around the world and for millennia now, coffee and tea have been the two most preferred drinks among people of all races, ages and backgrounds. Tea is, in fact, second only to packaged water. The geographical map of tea consumption keeps changing and that’s only natural.

Countries and areas that were once known for their coffee production and consumption, such as Turkey, Java and the Arabian Peninsula – that actually gave the name to some of the most coffee blends that exist, have now switched to drinking tea. Although coffee production is considerably higher than tea production, it’s also important to note that one cup of tea only requires 2 grams of tea to be made, while one cup of coffee requires 10 grams. 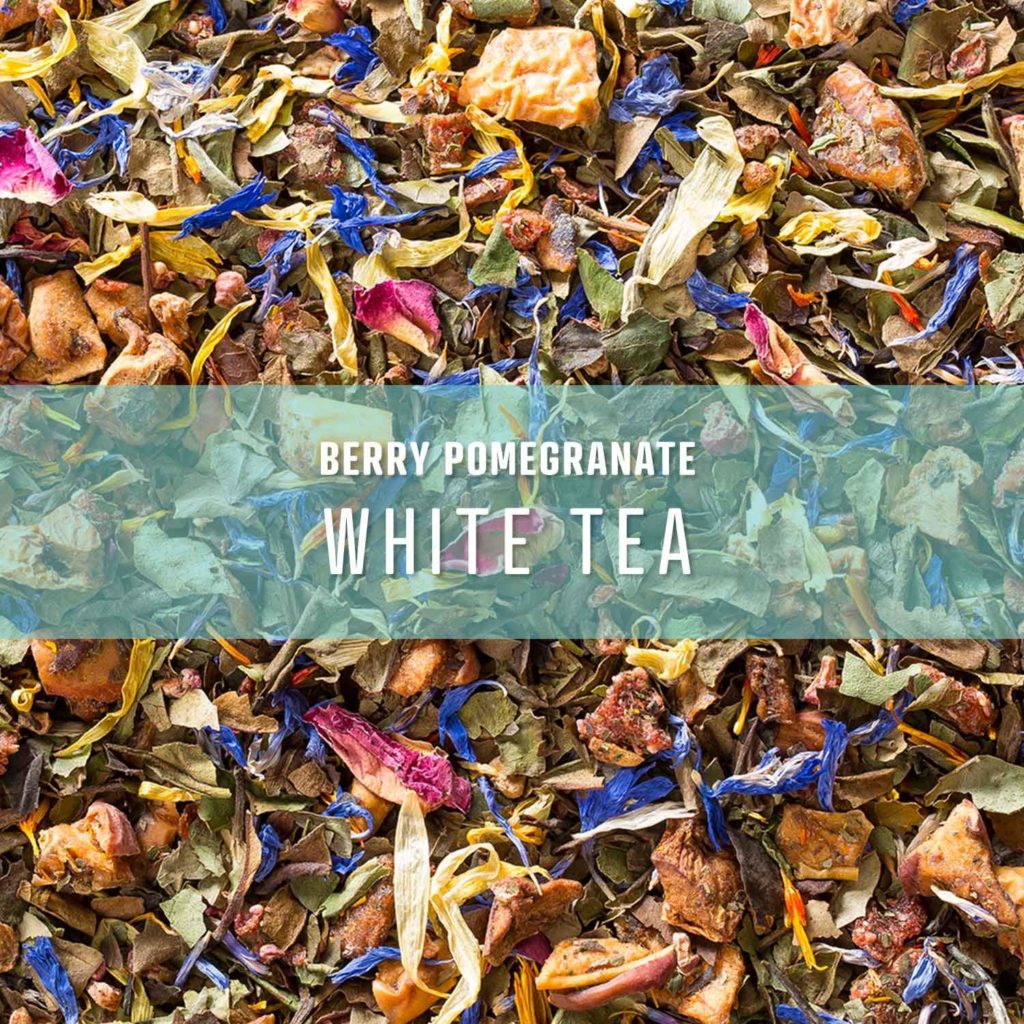 You’ll find tea all around the world in supermarkets, corner shops or large hypermarkets. Apart from this, you can make your own tea by collecting the plants you like, drying them properly and then infusing them with hot water. This is precisely the beauty of tea – its accessibility and the fact that it can instantly reconnect you with nature’s beautiful healing powers.

There are five important types of tea: black tea, green tea, white tea, oolong tea and pu’erh tea. All these types of tea actually come from the same plant, the Camelia sinensis plant, an evergreen bush that’s indigenous to both India and China and that now thrives in various parts of the world. What makes the tea in your cup different in the end is how the plant’s leaves are processed.

An Overview of White Tea

White tea is in fact the most delicate of the tea types out there, since it’s minimally processed. The young buds of the plant are still covered in fine white hairs when the plant is harvested for tea production. This is in fact what gave this tea its name. The tea plant’s leaves never really open fully before they are handpicked and carefully dried – as opposed to green and black tea production, where the leaves are left to oxidize for longer.

The earliest recollections of white tea are around the era of early Chinese imperial dynasties (between 600 and 1300), when tea drinking was rapidly spreading across the country. The Emperors of the time received a sort of tribute from the citizens in the form of rare and exquisite tea and white tea was among the best. Of course, the white tea today is not the same as back in those days, but we can get an idea of what this ‘pure like snow’ tea used to be like back then. 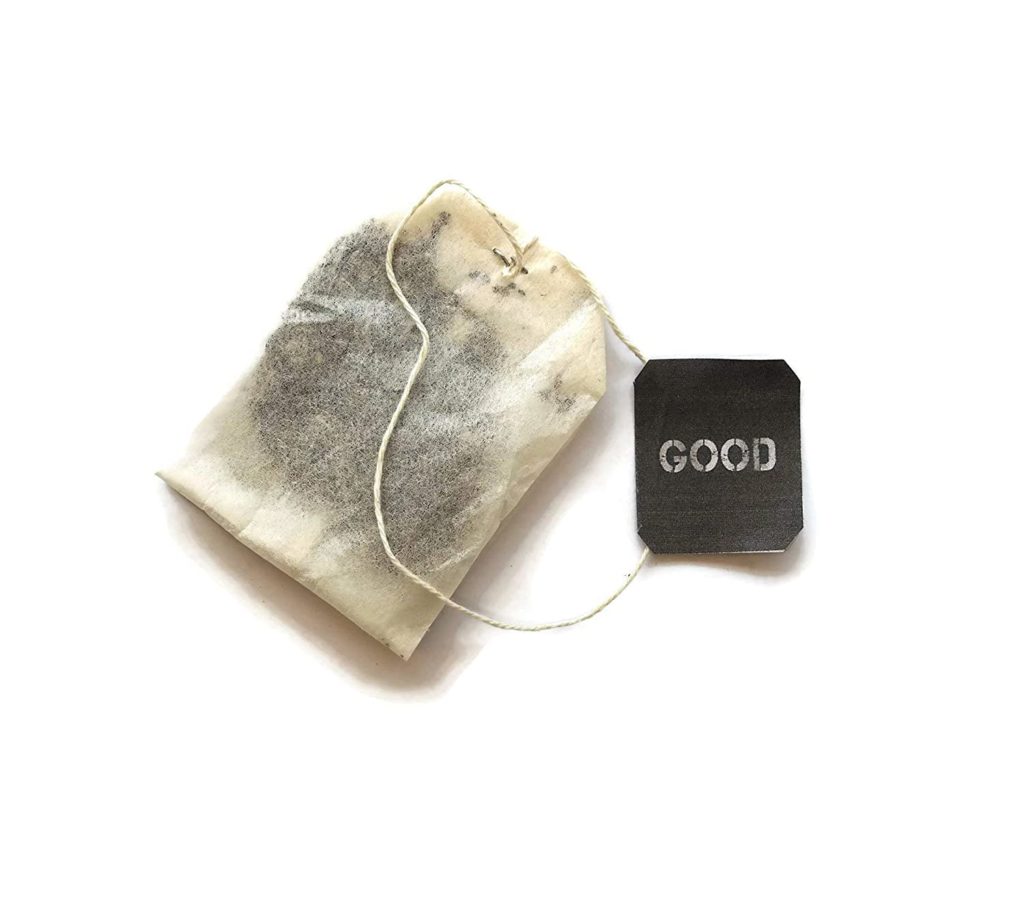 White tea is not only a comforting hot drink to have on a cold autumn afternoon, but also a drink that boasts tremendous benefits for both the body and the human mind.

How to Prepare Your White Tea

In order to properly prepare white tea, you’ll need to follow a few guidelines. It’s important to note that white tea can be brewed for a bit longer than green teas. In slightly hotter temperatures too. 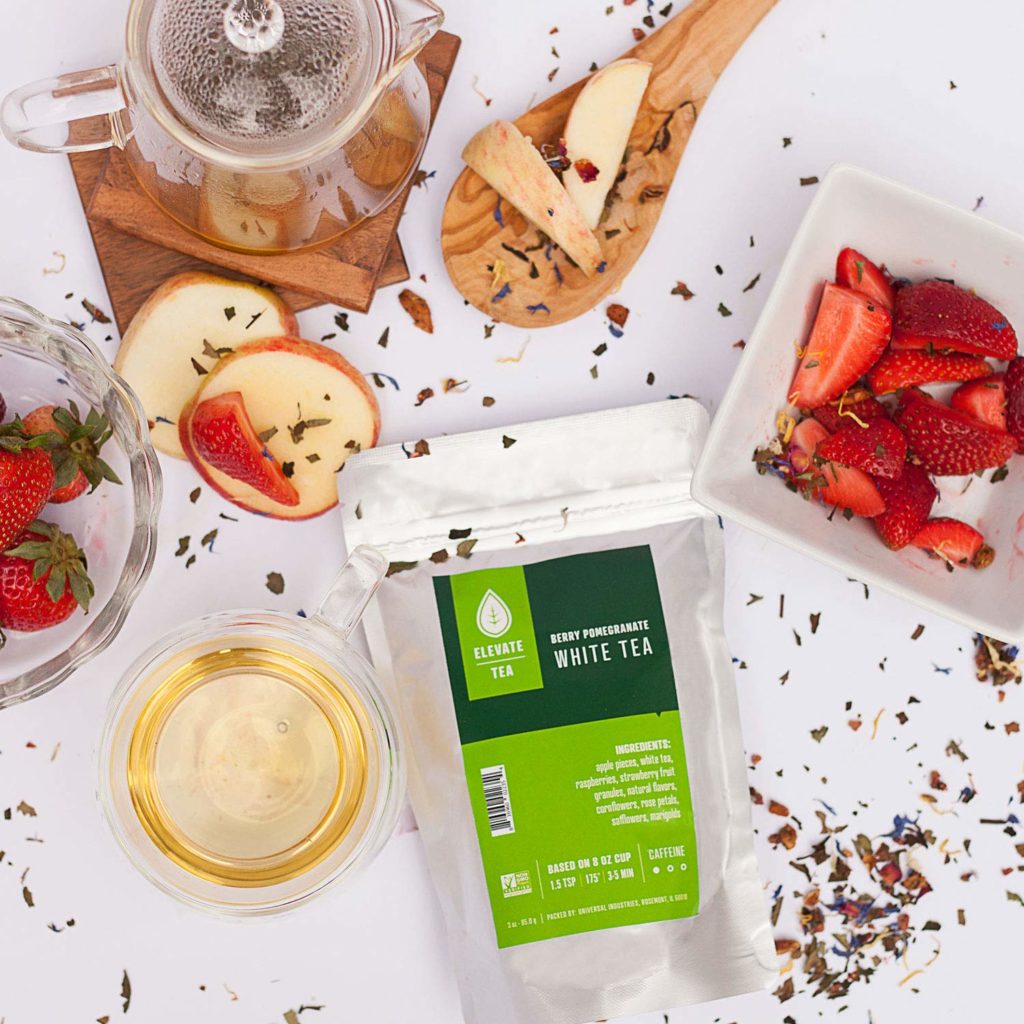 It’s generally agreed upon the fact that white tea has lower amounts of caffeine than green and black tea. However it all depends on the variety of white tea plants from around the world. These may have just as much caffeine content as black and green tea, depending where the plant has been cultivated and the way it’s been processed. 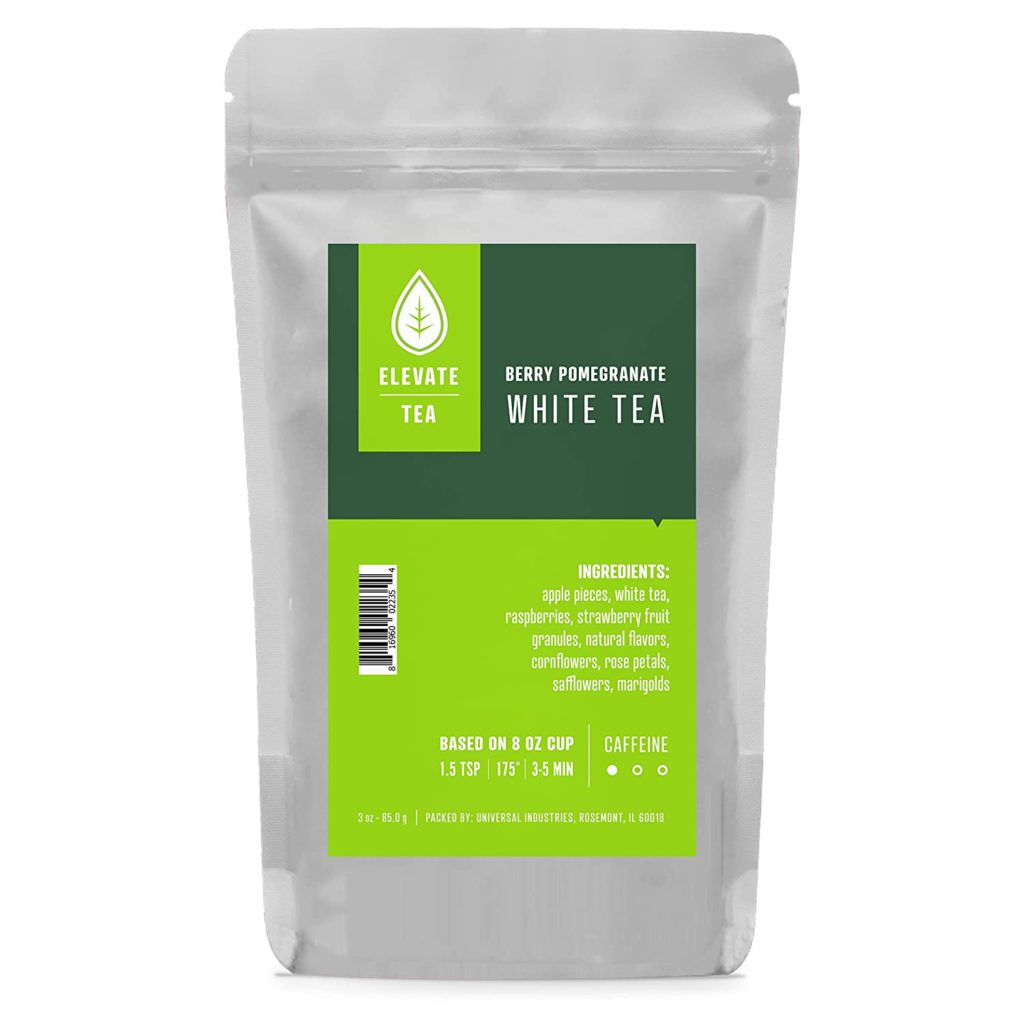 Tea never really goes bad, but it does go stale, so it’s important to care for it properly by choosing the effective storing methods to maintain its freshness. So with white tea keep in mind that it’s best to:

An Overview of the Pomegranate

The pomegranate is one of the most impressive fruits on Earth, both in terms of taste and aspect and health benefits. This fruit is red and closely resembles an apple, with a flower-shaped stem on top.

The skin is very thick and is not meant to be eaten – you’ll need to avoid it in order to get to hundred of juicy seeds on the inside of the fruit. These seeds are covered in something that’s called an aril – it’s red, juicy and sweet. 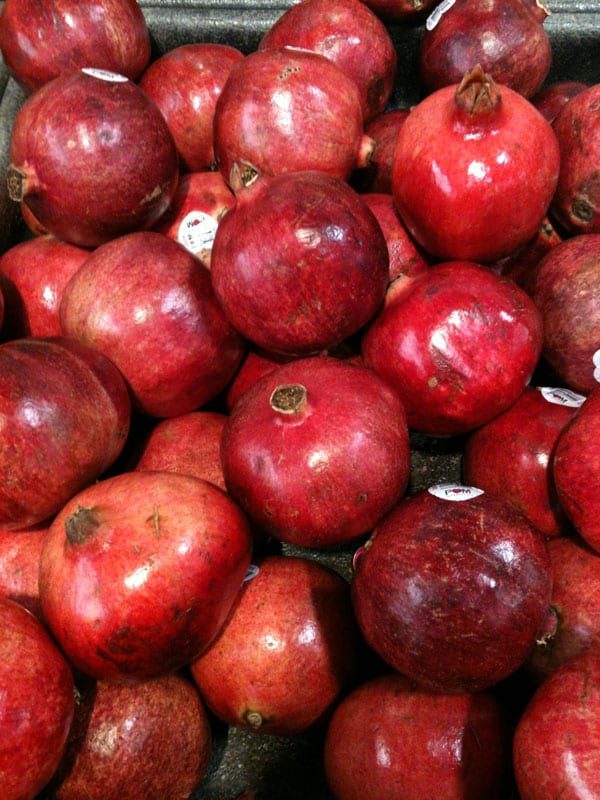 The fruit has quite the history and it’s also been mentioned in the Bible and the Babylonian Talmud. It’s believed to have originated in Iran and has then traveled to India. Nowadays the most important countries and regions it’s cultivated in are Pakistan, China, Bangladesh, Egypt, India, Afghanistan, Iran, Iraq, Burma and Saudi Arabia.

Pomegranate has always been revered not only for its juicy content and intriguing aspect, but also for its powerful content of nutrients – a true powerhouse for the human body.

Now that we’ve talked about white tea, you may want to know: is pomegranate tea good for you? Yes, it’s highly beneficial on its own and when you combine it with the properties of white tea, it truly shines. Let’s look at both pomegranate tea benefits below.

Now that we’ve seen more about both pomegranate and white tea, you may want to ask: is pomegranate white tea good for you? In short, yes, it’s extremely good for you. Now both white tea and pomegranate have each tremendous benefits for the human body, with effects that are meant to prop up the immune system and guard it against unpleasant health conditions that may appear down the line. Let’s take a look at five pomegranate tea health benefits when combined with the excellent properties that white tea brings to the table:

When pomegranate and white tea come together, you can be certain of the impressive amount of antioxidants you can benefit from.

Pomegranate, for example, contains two very powerful antioxidants called punicalagins and punicic acid. In fact, pomegranates are recognized as some of nature’s best antioxidant fruits. On the other hand, white tea contains a type of polyphenols called catechins.

This impressive antioxidant content is really important to the human body precisely because these compounds help fight against the damaging effects of free radicals. In this day and time, free radicals are more common than ever by means of smoking, alcohol consumption and polluted environments, slowly but surely wreaking havoc in the human body. Free radicals will accelerate the cellular aging process and will weaken the immune system. 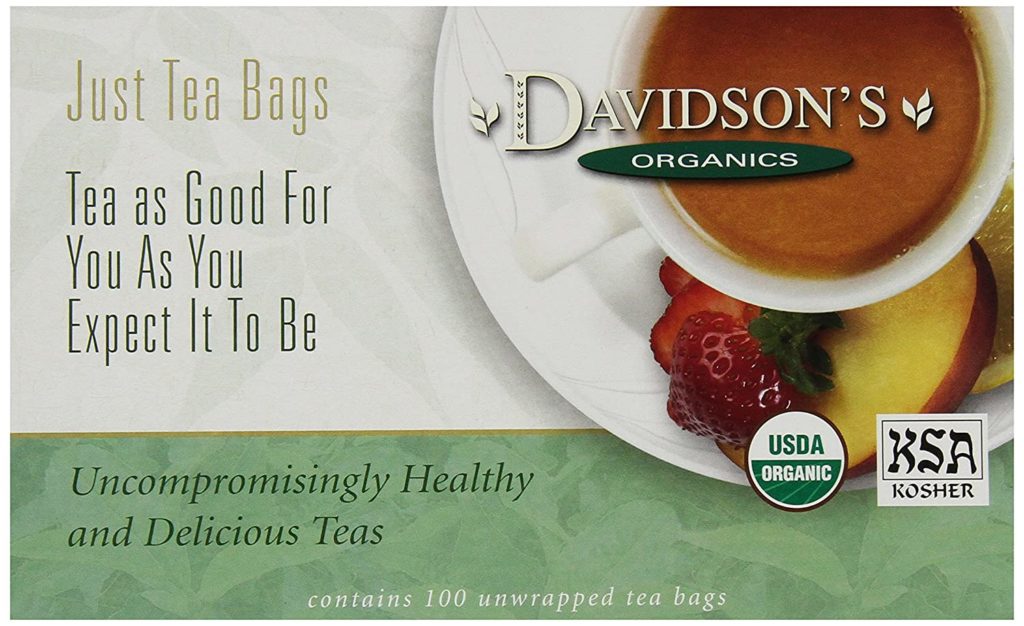 By regularly drinking pomegranate white tea, you’ll be able to maintain a more youthful appearance and feel in your body.

Apart from this, antioxidants also have excellent anti-inflammatory effects. This means that it can prevent chronic inflammation in the body that in turn may lead to serious diseases such as Alzheimer’s disease, heart disease, type 2 diabetes and cancer.

The punicalagins in the pomegranate side of the tea will have this powerful anti-inflammatory effect in the digestive tract, as confirmed by the study A review on the anti-inflammatory activity of pomegranate in the gastrointestinal tract. These same compounds may even have a positive impact when it comes to breast cancer and colon cancer cells.

White tea in particular has great weight loss properties, similar to green tea which is already famous in this respect. Both teas register similar amounts of caffeine and catechins such as epigallocatechin gallate (EGCG) – the very compound that’s linked to weight loss.

The test tube study White Tea extract induces lipolytic activity and inhibits adipogenesis in human subcutaneous (pre)-adipocytes shows how white extract was responsible for the effective stimulation of fat breakdown and the prevention of new fat cells from being formed.

Other studies show that white tea can also boost your metabolism by about 4-5%. This may be the equivalent of burning 70-100 calories per day, so when pairing this tea with a healthy lifestyle, preferably filled with sports activities, and with a balanced diet, you may find yourself losing some inches from your waistline.

White tea is also an excellent combination of three powerful compounds: fluoride, tannins and catechins. All three of these act like a natural guard against harmful bacteria and sugar that can affect your teeth.

Catechins in particular have been shown to effectively fight off plaque bacteria as shown in this study White and green teas (Camellia sinensis var. sinensis): variation in phenolic, methylxanthine, and antioxidant profiles.

All in all, by drinking pomegranate white tea you can have an extra aid in your fight against cavity protection. Your oral hygiene will be better supported, plaque will have less chance of forming and, with proper brushing techniques, you may even hold cavities at arm’s length for a very long time.

Oxidative damage is typically negative to the entire human body, since it impacts the proper blood flow all throughout the systems.

A similar effect is possible on men, as well, however more studies are needed to make this a concludent approach to pomegranate white tea.

5. An Aid In Lowering the Risk of Insulin Resistance

One of the most important hormones in the human body is insulin, as it supports nutrients being carried from the bloodstream to the cells, in order to be stored and used at a later date.

However due to high-sugar consumption, many people stop responding to insulin and then develop type 1 or type 2 diabetes. Insulin resistance is also unfortunately linked to heart disease and metabolic syndrome.

In this respect, it was found that polyphenols and EGCG play an important part in lowering insulin resistance and preventing high blood sugar levels.

Remember these are only five benefits of pomegranate white tea. Their excellent combination of vitamins, minerals and specific compounds make this tea a must in your daily life if you’re looking to look and feel fresh, while also building the immune system that’s capable of fending off health complications and diseases.

By drinking this tea, you may also prevent your body from developing Alzheimer’s and Parkinson’s disease, you may strengthen your memory and may offer your body excellent protection against fungal infections.

The taste of this tea is unique since it blends the delicacy of white tea with the unique and exotic aroma of pomegranate tea. What’s your experience with the pomegranate white tea so far? If you’ve tried it, what are the immediate and long-term effects you’ve noticed in your body? Let us know in the comments and share your personal experience, so that others may get to introduce this wonderful tea in their day-to-day lives.