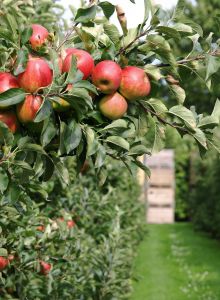 Apple orchards in Minnesota number to more than 100 orchards. They are spread over the northern region, twin cities region, southwest region and southeast region of the state. The Uantioxidant-fruits.comversity of Minnesota carried more than 90 years of research with its horticultural research center which led to the presence of rare apple varieties, found only in Minnesota. Some of these varieties are Malinda, Oriole, Red Baron, Mantet, Centennial, Keepsake, Chestnut, Fireside, Zesta, Honeycrisp, Haralson, Wealthy, Honeygold, Beacon, Sweet Sixteen and Prarie Spy.

Notable varieties in different apple farms across the state include the Fireside, also known as the Minnesota Delicious and was introduced in 1943. The Haralson is the most produced apple in Minnesota apple orchards. Almost 50% of the orchards grow this variety. The most in demand variety is the Honeycrisp.  It was introduced in 1990, a cross between the Honeygold and Macoun and is dubbed to be a good “keeper” in storage. One of the variety that’s also gets better in storage is the aromatic Keepsake apple.

What do you think of the different apples in Minnesota found on various orchards? Let us know your thoughts on this on Facebook or leave us a comment below.