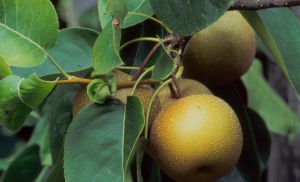 The benefits of Asian pear health wise and nutrition wise are plenty as it is considered one of the better antioxidant fruits.  Asian pears are relatives to your common pears seen in grocery stores. However, this kind of fruit is similar to an apple and it has many names which reflect its characteristics. Other similar names given to Asian pear are Nashi pear, Chinese pear, sand and Japanese pear, and apple pear. This antioxidant fruit is a very nutritious and healthy fruit which is set to be eaten from the tree and supermarket shelves. Most commonly named as Nashi pear as well, its production in US alone reaches up to 55 until 60% and is freshly marketed as fresh as it is from the plantation. The rest of it is processed and made in canned fruits. However, those preferring sharpness for the fruit appreciates Asian pears fresh flavor.

Other major benefits of Asian pear which most of the people enjoy are the following: