Want to learn more about one of the super fruit wolfberry? The health benefits of wolfberry are amazing and have been written about as far back as 230 A.D. Commercially, wolfberry is known as goji berry and often there are over-exaggerated claims of the benefits of the goji berry. One internet site claims that a Chinese man consumed the berry everyday and lived to be well over 200 years old. Often times these claims, made injunction with pyramid sales opportunities make it difficult to weed out what the true benefits are. Science is studying this super fruit, and they have come up with some concrete evidence that wolfberry have benefits. 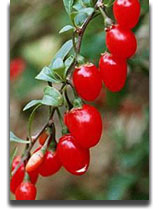 Wolfberry has been linked with immune health. It is found in studies of both animals and a group of seniors in China that using wolfberry increased antibody production in the T-cell, thus, improving the patience immune system.

Another claim is that wolfberry reverses the aging response. While it is difficult to believe that it reversed it so much as to allow a human to live to 200 it does seem to reduce the signs of aging. In a study in China it was found that there was an increase in antibody agents in the blood of those that took it.

Cancer prevention has also come up. While not cure, long term acute cancer patients in China reported that while taking Wolfberry, they had a longer remission between reoccurring cancer and showed signs of cancer regression. It is thought that Wolfberry would also be very effective in helping patients with Liver Cancer because of the ability to heal damage to liver cells. It also helps with the patient?s immune system and allows them to have a higher success rate with radiation therapy.

Lastly, wolfberry has been known to help with vision. There are very few foods that contain zeaxanthin, wolfberry is one of them. Zeaxanthin is a sister pigment with Lutein. They are known to protect the retina by neutralizing free radicals caused by sun damage. Wolfberry also contains a high level of beta-carotene which helps strengthen eye function as well.

While the scientific study of wolfberry is relatively new, there is no doubt that there are many health benefits of wolfberry. Wolfberry may not allow you to live to 200 but there is certain biological evidence that it can give your body much of what it needs to function the best that it can.

What Is The Maqui Berry?

[…] has proved that the highest antioxidant fruit juice is maqui berry much more than acai, mangosteen, goji and noni […]

What Are The Benefits Of The Goji Berry?

[...] is a miracle berry. That is one of the many benefits of goji berry. An effect of eating goji berry is even considered to result in you having the most natural way of [...]

Top 10 Fruits You Should Be Eating

[...] the goji fruit and Noni berry which have been used for thousands of years have been found to be very rich sources [...]

[...] over the word there is a lot of research being done on antioxidant fruits and their benefits.  The Wolfberry has been found to be among those fruits with the most beneficial properties. Wolfberry has the [...]