The Graviola is a healing fruit, if not the healing fruit in the world of herbal medicine. Though many pharmaceutical companies have claimed otherwise, the US National Cancer Institute in 1976 proved them wrong. Scientific research and studies conducted proved that the Graviola aside from its leaves and stem were discovered to be attacking and destroying cancerous cells and do not harm healthy cells.

The Graviola, soursop or Guyabano is one of the healthiest fruits available to the majority of the world’s population. It is alternatively known as soursop and it is native to humid and warm climates – areas such as Mexico, Central America and the northern part of South America.

It has a high content of carbohydrates specifically fructose aside from the amount of Vitamins C, B1, B2, Potassium and dietary fiber. The white juicy flesh of the fruit has a mixed taste of pineapple, strawberry and a tang of sour citrus. It has the shape of a green spiky heart and grows from 8 to 12 inches and weighs around 2.5 kilos maximum.

The Soursop is an immune system booster that could combat deadly infections. It is low cholesterol, saturated fat and sodium. 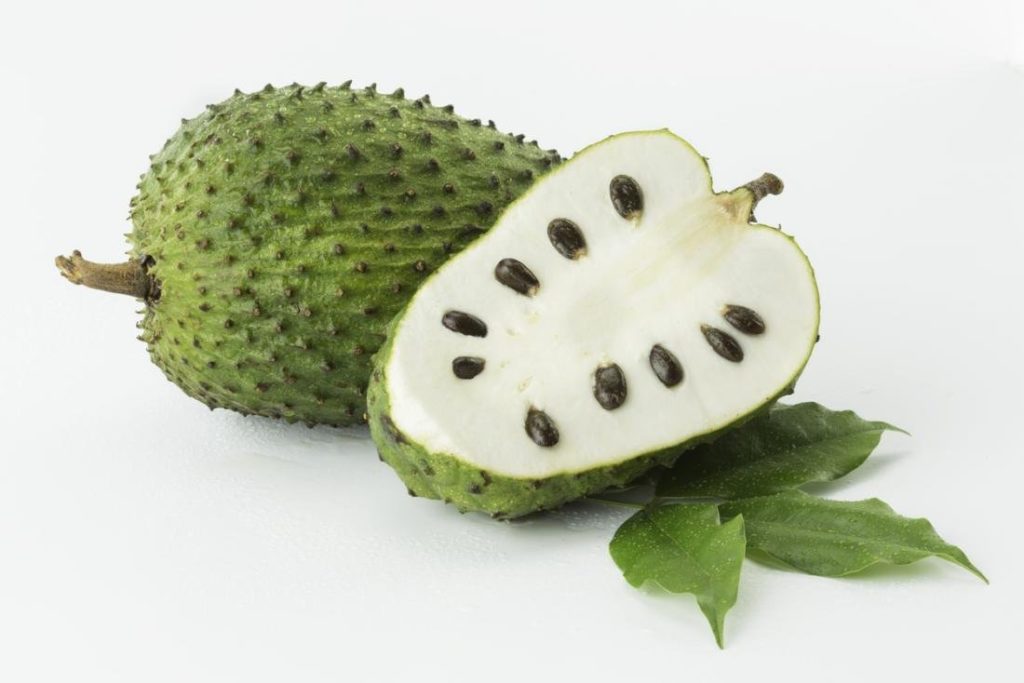 What Parts of the Graviola Fruit Can You Use?

The great part about the soursop is that not only is the fruit usable, but also the roots, the bark of the graviola tree and the leaves are edible/usable. The only parts of the graviola fruit that you can’t use are its black seeds that cannot be properly digested by the human body. All the other parts can be infused in teas that will alleviate fevers, stomach ailments and viruses.

Graviola in itself is a powerhouse of nutrients, vitamins and antioxidants that help build a stronger immune system and be better equipped against different afflictions and conditions that can impact the body’s well-being.

Having said this, it’s important to know that 100 grams (g) of raw graviola fruit contains the following: 1 gram of protein, 3.3 grams of fiber, 34% of the RDI of vitamin C, 8% of the RDI for potassium, 5% of the RDI for magnesium and 5% of the RDI for thiamine. Apart from this, you’ll also benefit from small amounts of iron, folate, niacin, riboflavin.

However apart from these already impressive qualities the graviola fruit holds when it comes to health improvement, scientists have already become increasingly curious about this fruit, since it may also have a positive impact on cancer cells. All the research we have in this direction stems from test tubes for the time being, but it’s still a promising launching point for further investigation. 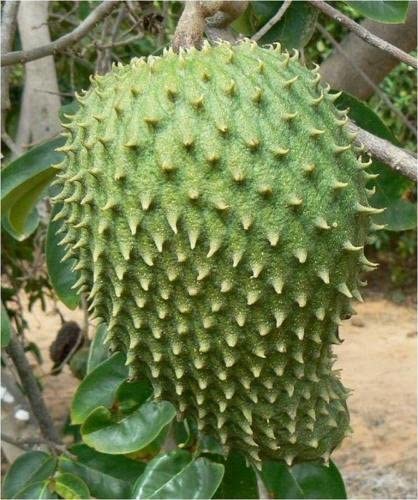 Another study, Antiproliferative activity and induction of apoptosis by Annona muricata (Annonaceae) extract on human cancer cells, was similarly conducted to notice the effect that graviola fruit has on leukemia cells. Amazingly enough, the soursop extract managed to stop the growth and formation of these leukemia cells.

These results are promising, but it’s important to take note of that fact that these test tube studies use extracts in high quantities that may otherwise be difficult to administer to people.

The amazing benefits of the graviola fruit on the human body do not stop here. The positive impact on cancerous cells may be the graviola fruit’s most impressive achievement, but it also has a myriad of other great benefits on the body’s well-being. 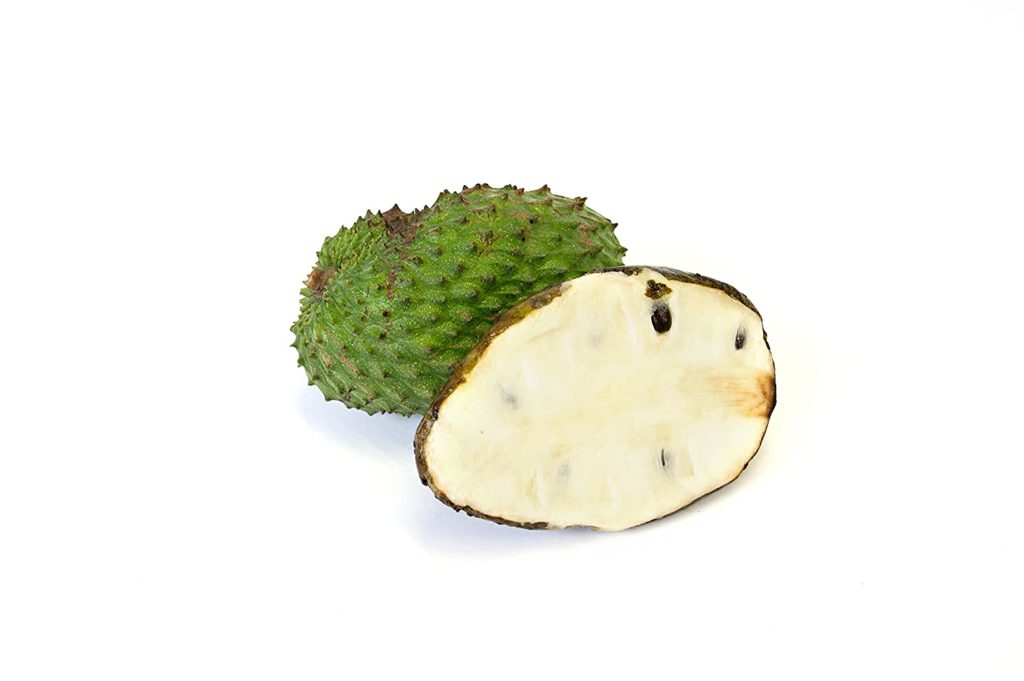 Soursop is also known to be an extremely great aid in fighting off bacteria in the body, especially oral bacteria. The most common types of oral bacteria that soursop managed to fight off were the strains that cause yeast infections, gingivitis and tooth decay. Soursop also worked well against the bacteria responsible for cholera and Staphylococcus infections.

Graviola fruit also proved to be efficient against inflammation in the body. Inflammation is the body’s natural way of reacting to and protecting against injury, but if left to chronicize, it can also lead to more serious diseases. A study, Mechanisms of Analgesic and Anti-Inflammatory Properties of Annona muricata Linn. (Annonaceae) Fruit Extract in Rodents, conducted on mice and rats showed that soursop extracts definitely help decrease inflammation and swelling. These studies have only been conducted on animals so far, but they indicate promising results in human afflictions such as arthritis. Additional research needs to be conducted in order for the graviola fruit to be officially considered a powerful aid against inflammation in the human body.

Diabetic rats also benefited from the soursop extract administered to them – the extracts helped lower the blood sugar levels by up to 75%. Similarly to other studies conducted, we can deduce that soursop may also be a good aid in decreasing blood sugar levels in humans, but additional research is needed.

Having said this, initial research shows that graviola fruit may be helpful in preventing and treating or managing diabetes, cancer, herpes, coughs, inflammation of the nose and throat, parasitic infections and leishmaniasis, an infection caused by sand fleas. The evidence we have so far is just enough to understand this fruit may hold tremendous potential in preventing and treating certain conditions, but is however insufficient still. More evidence is still needed in order to prove the clinical effects of graviola fruit on certain diseases.

The antioxidants contained in these spiky, miraculous fruits are meant to help neutralize harmful free radicals, which eventually cause damage to the cells. This turns the graviola fruit into an essential element in the fight against the body’s cellular aging process, making the soursop an effective ingredient in cosmetic products that help nurture and support the skin’s natural elasticity.

Soursop As a Key Ingredient In Your Healthy Lifestyle

When paired with a healthy nutritious regime, as well as with a fitness-rich lifestyle, graviola fruit can be the ingredient that helps you maintain the healthy body you always wanted. Its high vitamin C content will support a strong immune system, while also stimulating the production of white cells in the human body. You can integrate graviola fruit in your life by adding it to desserts and beverages. The only recommendation here is that if you want to start benefiting from what the graviola fruit has to offer, it’s indicated that you first consult a doctor, since there may be unwanted side effects to unregulated consumption.

Of course, trying this fruit on your own may be an entirely different experience and you may have noticed some immediate benefits on your well-being and health. By forming communities, together we can explore what this wonderful fruit has to offer and spread essential information that may be at the forefront of new scientific studies. 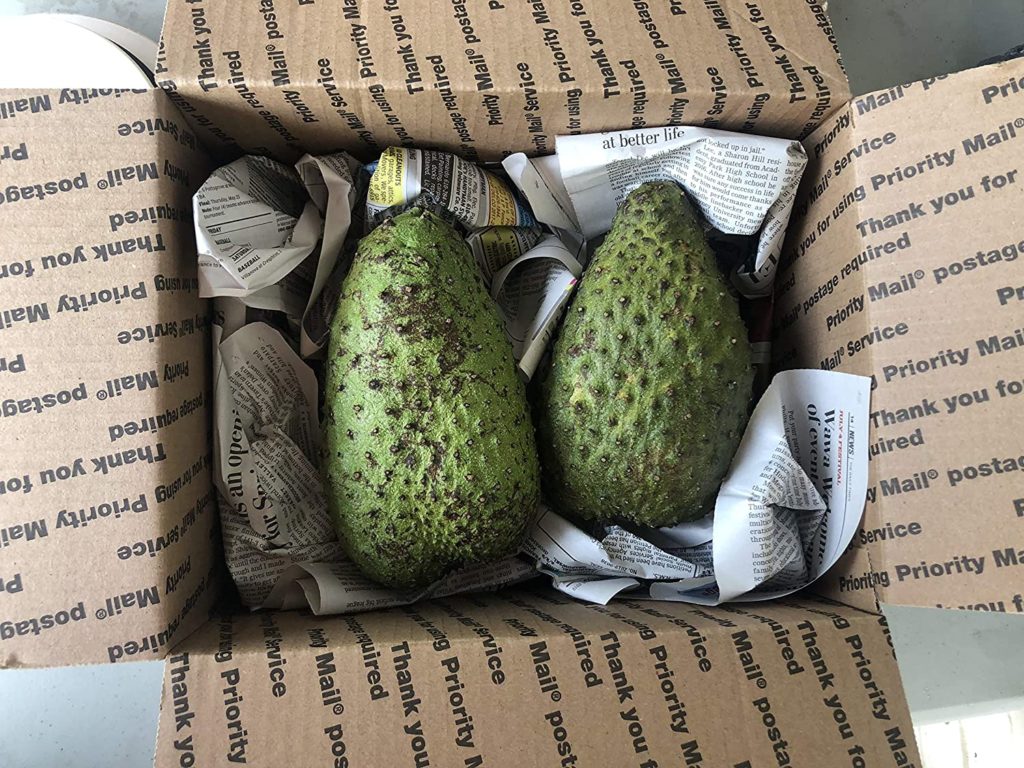 What are your views on the gaviola or soursop? Leave us a comment below or join our discussion on Facebook regarding the other benefits of this fruit.

[...] with evidence. With its rising popularity, more studies have been conducted to determine the health benefits of gaviola fruit. Natural News has published articles about the gaviola tree fruit stopping the spread of breast and [...]

[...] the health benefits of gaviola extend to cancer. That’s right, some even call gaviola “the anti-cancer fruit“. In a study conducted by the Department of Biochemistry and Molecular Biology at the [...]