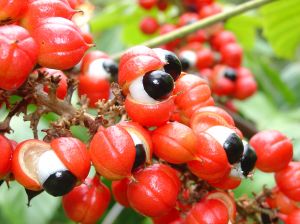 Guarana, The Other Coffee

When it comes to caffeine, coffee beans are the most obvious choice but people in the Amazon offers an alternative called Guarana. This climbing plant with fruits the same size as coffee beans is gaining popularity beyond the borders of Brazil, where it is a common name.

The Guarana berry has antioxidant qualities close to coffee. It is an energy-giving fruit but also can decrease one’s appetite. For those of you who want to lose weight, drinking guarana-based drinks is for you. It is often marketed as an energy drink but can also be taken as an ingredient in sodas or herbal tea.

There are other benefits from the guarana and some of them include use as a remedy for treating diarrhea since it has tannin. It is also a remedy for arthritis and if you have an awful hangover you want to be rid of. Incidents of monthly periods with cases of dysmenorrhea are lessened when women drink guarana coffee. It helps alleviate migraine and lower your blood pressure.

Guarana is not a miracle fruit but it has its moments, don’t you agree? Leave us a comment or join us on Facebook and share your thoughts.