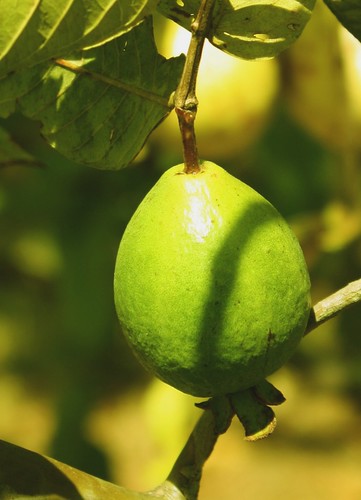 Guavas, a fruit with unique antioxidants, are native to Mexico, Central America, and South America. The most popular species is the Apple Guava. It is one of the only tropical fruits that can survive indoors.

In addition to being eaten raw and being diced up for fruit salads, this guava is popular dipped in stir fry sauces and made into beverages both alcoholic and otherwise.  Guava has a very high level of natural pectin, which people who make preserves use in jams and jellies for them to “set” properly. Because of this, guava or guava juice can be used with other fruits to make jams without having to add additional pectin.

Guavas have about four times the amount of Vitamin C as an orange. It is also high in fiber, folic acid, potassium, manganese and copper. It has varying levels of every major kind of antioxidant and polyphenol making it an antioxidant rich fruit.

Because guavas are so prized as polyphenol antioxidant fruits, it’s essential oil is sold by people who use it for benefits such as fighting cancer and reducing inflammation. Its leaves are also steeped to make rubs or poultices and used in first aid treatments and wound care. Its bark is used to treat diarrhea and fever.
Wc210