Graviola is one fruit with no shortage of health benefits. Native to warm and humid climates as found in Mexico, Cuba, Central America, and northern South America, graviola has been referred to as “the healing fruit.” Its other names include soursop, Guyabano, guanabana, Brazilian paw paw, custard apple and Evo. The fruit itself shares similarities with pineapples and strawberries in terms of taste. Add to this a taste of apple, with some citrus undertones, all supported by a thick creamy texture that resembles that of a banana.

The Annona muricata tree this fruit grows in can reach up to 30 feet in height and is evergreen. The graviola fruits themselves are dark green, prickly and can reach up to 12 in in length. Despite its perhaps uninviting appearance, the graviola fruit has long been discovered as an important aid in preventing or curing many health ailments.

The soursop has been used for years by native peoples as a miracle medicine. Not only is the fruit used for these purposes, but also the roots, leaves, and bark of the graviola tree. These parts were often turned into tea for consumption by the ill against fevers, viruses, and stomach ailments. Apart from its undegistable black seeds which are typically removed during the preparation process, you can use everything the graviola fruit has to offer. For example, you can make fruit juice drinks, nectars, ice cream flavoring, sorbets and smoothies out of its pulp. As far as herbal remedies go, the soursop is high on the list. Recently, even scientists have become impressed with the health benefits of graviola.

The soursop has been found to treat both bacterial and fungal infections while reducing inflammation. This is particularly helpful for those living in areas with intestinal parasite problems. Graviola also lowers blood pressure, so if you already have low blood pressure, be careful when using this fruit. If you have high blood pressure or problems resulting from it, graviola could be right for you.

In addition to the vitamins (C, B1, B2) you get from eating the soursop, it has an even more impressive effect — the health benefits of graviola extend to cancer. That’s right, some even call graviola “the anti-cancer fruit“. In a study conducted by the Department of Biochemistry and Molecular Biology at the University of Nebraska Medical Center, scientists were able to determine that graviola fruit inhibits the metabolism of cells. What does this mean exactly? — this fruit can kill pancreatic cancer cells. If you know anything about pancreatic cancer, you know it is an especially fatal type. The fact that the graviola was tested in tubes and human subjects holds hope for cancer sufferers.

Researchers at Virginia Tech also found this to be the case for breast cancer. They used graviola fruit extract to reduce cancer growth without causing any damage to healthy skin tissue in the breast. In mice, the extract reduced the growth of tumors by a whole 32%! A similar study has not yet been conducted on human cancer patients, so caution is advised – however the prospects are good considering the test results in the mice experiments. As scientists continue to perform studies on the fruit, we will find out even more about the health benefits of graviola. Who else has a feeling that the future holds good results for us?

Additionally, graviola fruit is a nice combination of vitamins and minerals meant to give your body that extra sustenance it’s looking for. Soursop contains a decent dosage of fiber, protein, vitamin C, potassium, magnesium and thiamine. Apart from these, graviola fruit also contains iron, riboflavin, niacin and folate in small doses. However the most important of its compounds are the antioxidants it contains. Free radicals, which are harmful compounds for the body, will typically damage the body’s cells and accelerate the body’s aging process. This is where the graviola fruit’s antioxidants come in and make a difference. These antioxidants may also play a role in preventing diseases such as diabetes and heart disease. 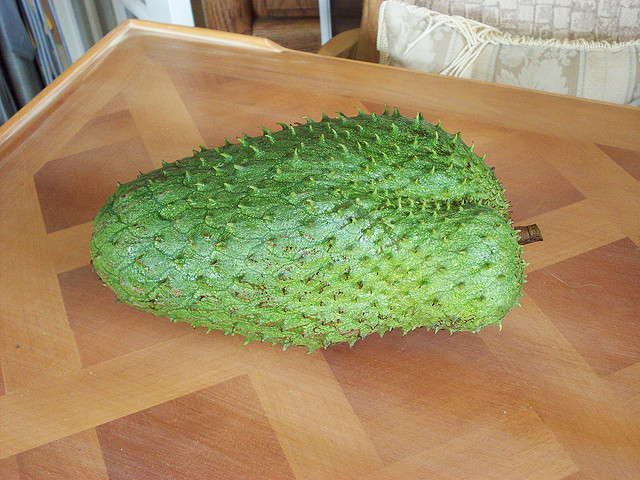 Another benefit that’s still not widely known is that soursop can also have great beneficial effects on the skin. Studies have shown that soursop leaves extract can help prevent skin papilloma, a condition that causes eruptions on the skin. It has also been shown that the same extract can calm the skin of babies. The benefits of this fruit are still relatively unexplored, so more studies are needed in order to prove its benefits on the human body’s skin and hair.

Graviola fruit has also been known as a good aid in the fight against bacteria. Some studies show the soursop has powerful antibacterial properties as well. Extracts of this fruit were used on different types of bacteria and proved to be extremely beneficial when it came to combating bacteria of the mouth. In one test-tube, graviola killed off strains of bacteria that cause yeast infections, gingivitis and tooth decay. Another test tube showed how potent this fruit can be in the fight against cholera and Staphylococcus infections. However it’s important to remember these tube-tests work with a highly-concentrated extract. This in no way compares to the amount you would normally get through your diet, so it’s best to keep in mind that graviola fruit still needs to be studied in order to have its benefits fully delivered to people. 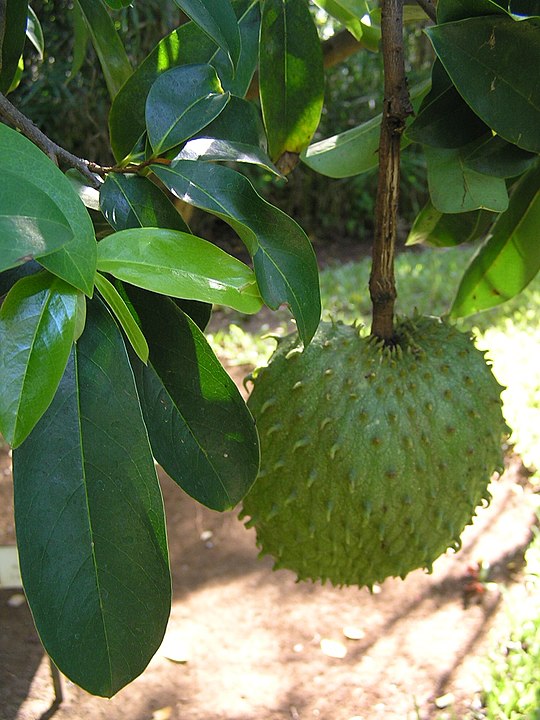 By Damien Boilley from suburbs of Paris, France – Flickr, CC BY 2.0, Link

Another one of graviola’s health benefits is connected to the inflammation levels in the body. Having said this, inflammation is a natural process in the body that occurs as an organic response to injury. However studies have shown that chronic inflammation can actually lead to the development of several diseases in the human body.

Other animal studies have also shown that graviola fruit extract may play an important role in decreasing blood sugar levels in the body. Diabetic rats were injected with soursop extracts for two weeks and their blood sugar levels went down by five times compared to those that hadn’t been administered the extract.

Although up until now graviola fruit extracts have only been tested on animals, the results shown by these tests are quite surprising and hold hope for future human health development.

Another thing to remember is that graviola fruit contains fatty acid derivatives called annonaceous aceteogenins. Among these, the annonacin is most predominant and is linked to a certain degree of toxicity which would not make the graviola fruit safe to use orally. Additionally, some studies show that, when eaten orally, the graviola fruit may contribute to movement disorders, similar to Parkinson’s disease. So it’s best to avoid consuming this fruit like this.

To this end, a word of caution is advised, as with any other natural products. Although it is said the graviola fruit has many different benefits regarding several health conditions, sufficient clinical trials have not yet been conducted to prove this. Having said this, dosage should always be calculated considering the user’s age, health and other conditions. Remember to always consult your physician before using graviola fruit or starting a graviola-based treatment.

All in all, nature is a treasure chest of wonders that are meant for us to enjoy and organically integrate into our lives. The graviola fruit is one of these bonuses that Mother Nature has prepared for us and to the consumption of which we are graciously invited. This fruit is versatile and can be used as an additional extract in teas, as well as in order to add flavoring to baked goods. Enjoy the benefits of this exotic fruit only after you have your doctor’s approval.