If you’ve already taken the plunge and grown your own, naturally you’re going to wonder when to pick banana peppers.

Banana peppers are a member of the chili family, related to the jalapeno but with a much milder heat and sweeter taste. Named after their banana-like shape and yellow color when ripe, they are a great plant to grow at home. The plants don’t take up much space, produce at least 25 to 30 peppers, and are quite easy to care for provided you live in a relatively warm climate.

Picking them at the right time is vital to get the best from your peppers. There are no hard and fast rules about the perfect time to pick the fruit, but there are a few guidelines that you can follow to make sure you get the most out of your crop. 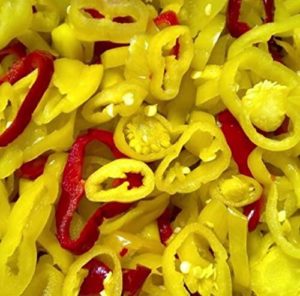 Please note that this article may contain affiliate links. That means that if you buy something, I may earn a small commission. You can read my full disclosure at the bottom of the page.

Banana Peppers don’t take up much space, produce at least 25 to 30 peppers, and are quite easy to care for provided you live in a relatively warm climate. Click to Tweet

How long it takes to become ripe:

Like most varieties of pepper, banana peppers take around 70 to 75 days to fully ripen. Of course, this is a rough estimate. In practice, the time it takes for them to become ripe varies based on the climate and the type of soil they grow in. That said, it’s a good idea to keep this rough time frame in mind.

Sweet and hot banana peppers ripen at slightly different rates and show different signs of maturity, so it’s best to discuss them separately. 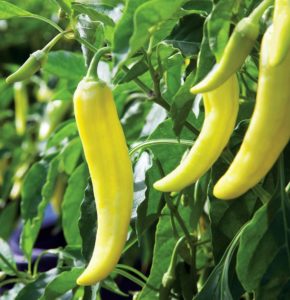 Banana peppers take around 70 to 75 days to fully ripen.

What to look for first before you pick:

As well as age, length of the pepper is a good indicator of maturity. With sweet banana peppers, you should look for them having grown to between four and six inches long. They are first ripe when their skin color turns yellow and they are close to the average length. 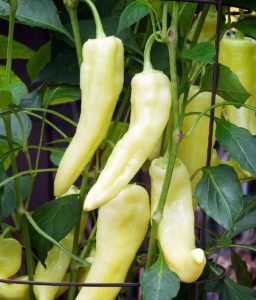 Banana Peppers that aren’t quite yet ripe yet

Hot banana peppers tend to be larger than the sweet variety. They’re usually around six inches long when mature. You should also look out for when they change from green to yellow.

How to properly pick banana peppers:

While you can pick the peppers from the plant by gripping and twisting the stem, you risk damaging the plant if you do. To make sure this doesn’t happen, simply snip with sharp scissors or small garden shears. You should leave about a quarter of an inch of the stem attached to the fruit.

While you can pick the peppers from the plant by gripping and twisting the stem, you risk damaging the plant if you do. Click to Tweet

Uncommon Fruits for Every Garden

Growing Blackberries in a Home Garden 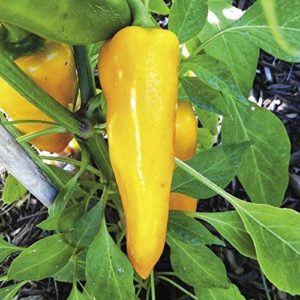 When to pick banana peppers:

So, when should you pick your banana peppers? The interesting thing about sweet banana peppers is that rather than become inedible if they over ripen, they just become sweeter as their color changes from yellow to red. At this point you can leave it up to taste as to when you decide to pick your peppers.

Exactly like sweet banana peppers, having yellow skin suggests that the hot variety have ripened but it doesn’t mean you have to harvest them straight away. With hot banana peppers, harvesting them early while the skins are yellow will give you a milder, less spicy chili. If you like your peppers hot you should wait for the skins to change to red before harvesting.

How to store banana peppers:

Since it’s likely you’re going to end up with quite a few of them, you’re going to want to think about how to store your banana peppers. They keep in the vegetable drawer of the fridge for up to two weeks after harvesting. But what if you want to keep your peppers for longer, or if you’ve had a particularly large harvest? There are a few options.

First, you can pickle them. Pickling works particularly well with the hot variety as pickled spicy peppers are a delicious accompaniment to BBQ’s, burgers, and salads. Once pickled, they should last between two to three months in the refrigerator. 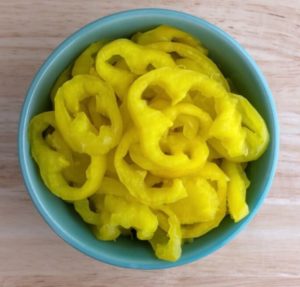 They are can also be frozen. Cut them in half or into slices, put them into freezer bags, and leave them in the freezer for up to six months.

Alternatively, you could dry them. It’s pretty straight forward to dry your peppers in the oven. Simply place your freshly picked peppers on a baking sheet in an oven at 150 ̊F. It should only take an hour or two for the peppers to completely dry but make sure to check them every 30 minutes or so. The peppers are completely dry when they are brittle and break with a little pressure applied. Once fully dried your peppers should be stored in airtight jars out of direct sunlight. Dried banana peppers can be safely kept for three to six months.

Banana Peppers can also be frozen. Cut them in half or into slices, put them into freezer bags, and leave them in the freezer for up to six months. Click to Tweet

Will banana peppers ripen after picking?

If you pick them when they’re green, and nowhere near ready, they won’t ripen. However, if you pick them once they’ve begun to ‘blush’ and even slightly turn red/orange then often, if left somewhere at room temperature, they will continue to ripen. Better yet, if you feel you’ve picked them too early place them in a bowl or paper bag with a banana. This will speed up the ripening process.

An unusually tricky thing about deciding when to pick banana peppers is that, unlike most fruit, their color isn’t always an indicator of their ripeness. Sweet banana peppers are best enjoyed when yellow though can be eaten when red. Hot banana peppers can be enjoyed whether they are yellow, orange, or red, red being the spiciest. So as long as your peppers are no longer green and are about four to six inches long they’re probably ripe. 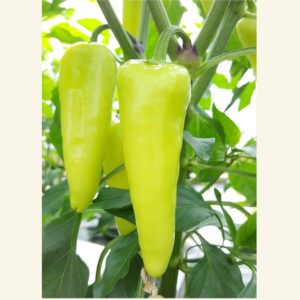 Their color isn’t always an indicator of their ripeness.

Can you eat banana peppers raw?

While most banana peppers you can pick up in stores and restaurants are pickled, they are also perfectly edible raw. In fact, they are delicious fresh and raw banana peppers have a completely different flavor to those that have been pickled.

What can I do with raw banana peppers?

Raw banana peppers are a great topping for pizzas, mixed into salads, or as a little extra bite in a sandwich.

What can I do with a bunch of banana peppers?

If you’ve had a particularly large crop of peppers and you don’t feel like freezing, pickling, or drying them, there are still a few things you could do with them. A particularly good way to use up your crop is to make a banana pepper salsa. Simply put around ten peppers, half an onion, four fresh tomatoes, and a clove of garlic in a food processor and give it a few pulses. Then mix in a little lime juice, and add salt, pepper and cilantro to taste to make an absolutely delicious and fairly mild salsa.

When to pick banana peppers can vary depending on your taste. So long as they’ve grown to be at least four inches long and are no longer green you can enjoy this delicious chili whether it’s yellow, orange, or red.