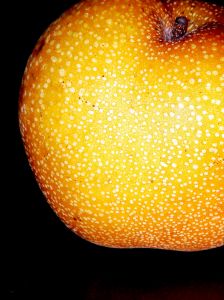 The Nashi pear is from Korea, Japan, and China. These pears are called by different names, such as: sand pear, Korean pear, Asian pear, Chinese pear, Taiwan pear, and Japanese pear. All over East Asia they are grown as well as in the United states, Australia, and New Zealand. Nashi pears’ history runs deep in East Asia where it is a sign of an early spring to see the trees flowering down the countryside and in gardens.

Because of the large size and higher price, the pears are often eaten at the table as a family, given to visitors or given away as gifts rather than being snacked on. Due to the high amount of water and the grainy, crisp texture, the pears are not often used to make jams or pie filling. They are much different than the pears found in European markets. Most of the time they are peeled and eaten uncooked. Nashi pears benefits include a good deal of dietary fiber when eaten with the peels. Pears also offer large amounts of potassium and vitamin C.

Asian pears ripen while they are still attached to the tree, so when you buy them they are already table ready. When it is gently wrapped to prevent it from bruising, the wonderful smelling fruit can last in your refrigerators’ crisper for many weeks.

[...] Asian pear and gastrointestinal health is a rising focus among doctors and nutritionists alike. Whether the fruits consumed directly, extracts are used in cooking, or a tincture tea of Asian pear is consumed regularly, the benefits are becoming clear. Asian pear is finally coming into the limelight as seen by the increase in products such as Bigelow’s Organic Rooibos with Asian Pear Tea. [...]