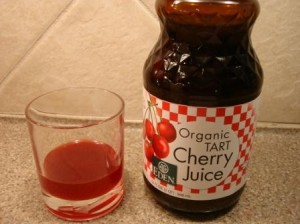 If you’re into strenuous physical activity like running marathons, you’ll have an increased risk of injury to your musculoskeletal system. It can lead to muscle damage that results in acute inflammation, which then leads to decreased athletic performance. When our bodies respond to injury naturally, we experience pain from the inflammation, swelling, and erythema, a redness of the skin due to congestion of the capillaries.

The gold standard for treating soft tissue injury is rest and ice, compression, and elevation (RICE). For additional pain relief, many take non-steroidal anti-inflammatory drugs (NSAIDs). Although these drugs are often very effective, they can have scary side effects, such as ulcers and, less often, stroke or heart attack. However, there is a natural, safe, and healthy alternative for pain relief from sports injuries.

For centuries, people have used natural compounds to treat inflammatory problems, and encouragingly, with less side effects. The tart cherry is one such compound. Recent scientific studies have confirmed that, due to tart cherry nutritional properties, tart cherries are about as effective as NSAIDS in treating the chronic inflammation that causes acute (short-term) pain symptoms in athletes. To take care of the effects of exercise-induced muscle cramping often resulting in pain, researchers suggest that runners drink tart cherry juice for eight days before participating in a vigorous endurance event. In fact, tart cherries have also been proven effective in treating non-athletes for chronic (long-term) pain symptoms due to inflammation, from conditions like rheumatoid arthritis.

Cherry’s anti-inflammatory effects are caused by its compounds known as anthocyanins. Researchers believe that anthocyanins reduce inflammation by reducing oxidative stress, a major cause of autoimmune disease. Cherry contains potassium, vitamin C, and good amounts of vitamin A. Female runners may ask do cherries have iron? Yes, they do. Fruit is generally not a big source of iron, but tart cherries are loaded with vitamin C, which actually helps you metabolize the iron better. This vitamin is also important to the making of collagen inside of the muscles, blood vessels, bones and blood– all important things a runner needs.