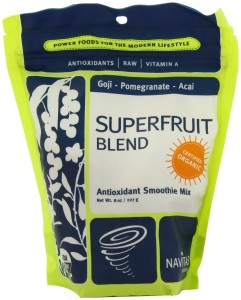 Looking for an easy way to combine the amazing health benefits of the pomegranate and Goji and acai berries? Instead of taking the time to acquire each of these in their whole fruit form and then prepare them, why not go with a dried fruit powder version? Navitas Naturals offers a 100% organic, veggie, raw, kosher, gluten-free, and dairy-free Goji/pomegranate/acai mix for a reasonable price.

This blend features high amounts of vitamins A, B, C, and E, as well as minerals like iron, potassium, and germanium. It doesn’t stop there though — this mix is rich in beta-carotene, amino acids, and of course… antioxidants! Each of these fruits alone has incredibly powerful effects on your body’s immune system, as well as the look and feel of your skin. On their own, they are very helpful in boosting one’s diet to prevent heart dysfunction and cancer while fighting off free radicals. When you combine the three, well, you’re dealing with a Superfruit Blend, just as Navitas Naturals has named this product, and that means you’re going to notice a huge improvement.

This particular mix is marketed for use in smoothies, which is a great starting point you can’t really go wrong with. This isn’t its only use though. The product can be mixed in with yogurts, oatmeal, or teas to add a fruitier flavor to anything that would otherwise be a bit plain. You could even go so far as to sprinkle some on top of a salad or make a separate salad dressing out of it by mixing it with other ingredients. It’s really a matter of how much effort you want to put into meals. You can put quite a bit or you can take the easy way and drop a spoonful of it into some tea.

10 Great Products Made from Antioxidant Fruits

[…] Navitas Naturals Superfruit Blend – This is exactly as it sounds – a mix of dried fruit powders that are potent antioxidant fruits. This blend includes goji berry, acai berry, and pomegranate. Tasty! Good source of: vitamins A, B, C, E, and minerals potassium and iron. […]