Categories Antioxidant Fruits, Availability of Fruit, Health, List of Fruits, Uses of Fruit, Where to Buy

With over 1,000 different types in existence, there is a cherry out there for everyone’s taste buds. The most familiar types are maraschino, black, bing, and rainier cherries. The choke cherry, black stone cherry, morello, north star, napoleon, and Spanish cherry cherries are some of the less well known types.

Many of them come from the subgenus Cerasus and are cultivated in the Northern Hemisphere in at least twenty different countries. These tasty antioxidant fruits grow best in temperate climates, and their peak season is summer. The seeds of a cherry do require some cold to germinate, which is why they cannot grow in tropical weather. With all the types of cherry, it’s hard to know where to start.

Unfortunately, not all the types are edible or as delicious as others. The most popular types of cherries are: maraschino, black, bing, and rainier cherries. You can find these cherries in supermarkets all across the western world. The following is a list of the more familiar types of cherries, along with some lesser known (but not obscure) ones: Here is a list of cherry types.

Most often, cherry types are divided into two categories: sweet (P. avium) and sour (P. cerasus). Sweet cherries are often eaten plain, while sour/tart cherries are used for cooking (adding flavor and the like). These two categories have different benefits.

Sweet cherries are less physically healthy, providing both fiber and vitamin C but not in quantities as significant (to Daily Value) as with sour cherries. Sour cherries contain high percentages of vitamins A and C and beta carotene.

These types of cherries come from Western Asia and Eastern Europe, but they are now mostly popular in Northern America. The ancestors of most sweet cherries are in fact sour cherries. To this end, bing cherries are one of the most popular types of sweet cherries out there.

It’s indicated that you consume them raw and fresh, after you’ve made sure you picked the juicy fleshed ones, with shiny skin. A great indicator of their freshness is a bright green stem.

The acerola cherry is reported to have a vitamin C content higher than any other fruit we know of. You can find this type of cherry growing in the Western Hemisphere and it’s also traded under the name West Indies cherry or Barbados cherry. Although not a true cherry, since the fruit itself resembles a berry more than anything else, acerola has been recognized as a potent aid with all sorts of ailments, including those related to the liver, dysentery, diarrhea, depression, fungal infections, colds and coughs. More recently, the medical industry has started considering introducing its vitamin C extract in daily supplements, but further research is still needed.7

The acerola cherry is highly perishable, so it’s recommended that you grow it on your own and freeze it as soon as you pick it. This is another reason why you mostly find this fruit in supplements, as powder, tincture, capsule and even in chewable form.

Bing cherries and Rainier cherries are extremely well-known varieties, and the former is produced primarily in Michigan. Bing cherries are extremely popular especially since they have that classic heart shape that most cherries have and because the taste is very rich, sweet and tangy, with a juicy, yet firm interior. The Bing cherry obtained its name from a Manchurian Chinese immigrant, Ah Bing, and is now very popular in the United States. This type of cherry is a great source of iron, calcium, vitamin A and C, boron and potassium. Due to their delicious taste, they are an excellent addition to any dessert and can be paired well with vanilla, cream, marzipan, cinnamon, peaches, nutmeg and the list can go on. You can easily eat these cherries fresh, canned or frozen.

The Rainier cherry is a special type of cherry, since it was developed at the Washington State University in 1952, by Harold Fogle, as a cross between the ‘Van’ and ‘Bing’ cultivars. This low-acid type of cherry has a creamy yellow to medium yellow-orange color, which is perfectly paired by its sweet, caramel-like taste. Most people eat them fresh, but they can also serve as a tasty ingredient in summer dessert dishes.

The Lapins cherry is a type of cherry that was developed in British Columbia, as a cross between the Van and Stella cultivars. This type of tree is self-fertile and also a great pollen source for other cherry varieties. The Lapins cherry is seen as a high-quality type of cherry – it turns deep red before it is ready to pick and is sweet while still red. This type of cherry is highly versatile and can be eaten raw, juiced, dried, preserved or cooked, while also making great pairings with smoked meats, cheeses, pistachios, ginger, dark chocolate and so on.

Morello cherries are of the sour variety and although they can also be consumed raw, mostly when they are perfectly ripe, they are mostly used in desserts, pies, drinks and other recipes. These dark red cherries are more popular in Europe and their red-blood juice is often a great ingredient for cocktails.

The montmorency and balaton varieties of cherries are produced primarily in Michigan. Montmorency cherries are popular in the midwest U.S. and fit into the sour category. The Montmorency tart cherry contains a healthy dose of melatonin, a natural sleep cycle regulator, as well as fiber, antioxidants, beta carotene and potassium. The Montmorency cherry is a great supporter of healthy joint and cardiovascular function, thanks to its anthocyanins composition. The Balaton cherry is a type of cherry that originated in Hungary, after which it started being grown commercially in the US in the 1980s.

Compared to the Montmorency cherry, which has light-colored flesh, the Balaton cherry has a rather darker, burgundy color and is sweeter, albeit tangy in taste. Just as the Montmorency cherry, the Balaton variety is also perishable and is especially prone to experiencing damage brought on by harsh winter conditions. However the Balaton cherry is pretty firm and can be harvested by hand without the stem, since the fruit naturally develops a special cell layer at the stem attachment, which acts as an organic sealer.

Maraschino cherries are among the most popular types of cherries across the globe, since they have been widely used as garnish for cocktails and desserts. These types of cherries get their name from the very process developed to preserve them. Sour marasca cherries from the Dalmatian Coast used to be soaked in maraschino liqueur, distilled from the flesh, stems, leaves and pits of the same cherries.

The Maraschino cherry has had a sinuous existence in the United States, since it was originally removed from the market during the Prohibition. Further on, in the 1920s, a new way to preserve these cherries was developed to not include alcohol, while also removing flavor and color. These were later on kept in sugar syrup and color was artificially added. However nowadays you can find completely organic Maraschino cherries in specialized food markets – their color is simply added with the help of beet or radish juice. What distinguishes these cherries, as you find them in the supermarkets, is their taste which resembles that of candy more than it does the taste of fresh fruit.

Due to their high sugar composition, Maraschino cherries are easy enough to store, as long as you prioritize a dark and cool location. Compared to the fresh cherry varieties, Maraschino cherries pack very little nutritional benefits and are to be avoided for regular consumption, since mass-produced brands may add unhealthy flavorings and colorings. 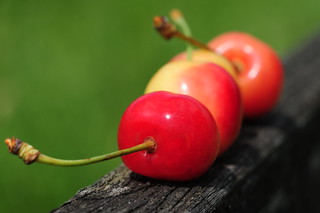 The Napoleon cherry is a yellow-skinned cherry that ripens in early December, with a sweet and tangy taste that is unmistakable among cherries. Its country of origin is Germany and it’s not a self-fertile type of cherry tree. The Napoleon cherries are excellent for consuming raw.

The Tieton type of cherry is a very aesthetically pleasing type of cherry that is large, plump and with a mouth-watering mahogany glossy finish. This is the type of cherry that ripens by the end of May and presents a mildly sweet taste.The Tieton cherry tree is vigorous, but does not yield a great quantity of fruit – it is recommended that it is planted with more than one type of pollenizer. You’ll find Tieton cherries displayed in most grocery stores due to their sweet flavor, large size, and glossiness, which make them appear enticing.

Research has been conducted to establish the amount of anthocyanins in cherries and their effects. So far, the studies suggest that cherries can have an effect on inflammation and pain. In one study, tart cherry powder combined with a high-fat diet, was fed to rats. These rats did not gain as much body weight as others. This suggests tart cherries could reduce weight gain, but further research is necessary on this topic.

Most recently, scientists have tested cherries’ effect on sufferers of gout. They found that individuals who eat cherries regularly had a 35-75% lower risk of experiencing an attack of gout, which causes joint inflammation that is incredibly painful. The lead researcher of this study urges sufferers not to give up on their gout medication, but to increase their cherry intake in combination with it.

The year following this study, the research team checked in with participants and found that those consuming cherry extract had a 45% decrease in attacks. The most significant change was for those eating raw cherries, who experienced a 75% drop. Simply amazing! For more information, read how cherries work to prevent gout.

Apart from this, cherries also play an integral part in the fight against diabetes and this is because their glycemic index is much lower than other fruits’. This means your insulin and blood sugar levels will not be severely impacted when consuming these fruits. Having said this, cherries also protect against diabetes and help manage this condition if you already suffer from it.

Cherries are also a favorite among athletes, since they tend to reduce the post-workout soreness. When consuming cherries, there is less wear and tear at a cellular level and muscles are much better supported in their recovery.

These amazing fruits are also a powerhouse of antioxidants which will help fight free radicals in the body, which in turns protects against premature cellular aging. Apart from this, they are a natural source of the melatonin hormone which regulates the body’s sleep-wake cycles. So if you’re having trouble sleeping, you may want to try and increase your cherries intake before sleep.

Colon cancer may also be prevented when you include cherries in your diet. The dietary fiber it contains will help with weight issues that are usually a factor in developing seven types of cancer. Cherries also provide a great source of anthocyanins, which may enhance your memory.

As you can see, there is a wide variety of cherries available on the market for you to choose from and enjoy. Just pick the right ones for you and enjoy them as part of your new antioxidant-rich diet.

Read and learn more about cherries! Visit the following pages on this site:

Is there a cherry named Gayla? And if so is it a sweet or tart cherry?

What Exactly Are Strawberry Cherries?

[…] Washington, by a company called Yakima Fresh, strawberry cherries appear to be just another in a series of interesting cherry varieties. The company website has the following to say about strawberry […]

[…] you know anything about the different types of cherries, you won’t be surprised that Rainier cherries are some of the most expensive. Their sweetness […]

[…] Cherry Fact: There are over 1,000 types of cherries and they are mainly categorized into two types: the sweet and the […]