Yellow Passionfruit: the Dessert of the World 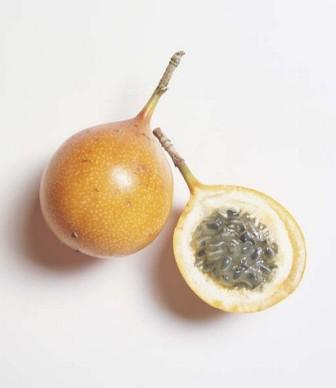 The Golden Passionfruit has a very different appearance from the purple Passionfruit. It is bright yellow and can grow up to the size of a softball, and it has a glossy, smooth, and light rind.

The Passionfruit has other names like guavadilla, parcha, maracuyá, chinola, lilikoi, markisa, saowarot, passionflower, and yellow pasiflora fruits. While the purple passionfruit is the less acidic of the passionfruit varieties and has a richer flavor, the golden passionfruit is used around the world to make many different kinds of foods and even medicines.

It is used as a base for different liquors in Portugal. A mousse made from passiofruit is a popular treat in Brazil and the seeds are used as a decoration on cakes. Jams are made from it in the Dominican Republic. Topping shaved ice with passionfruit syrup is popular in Hawaii. Passionfruit is sprinkled with chilli powder and lime in Mexico.

It is cooked with to make a rich syrup in Indonesia.  In New Zealand and Australia it is used for fruit salads, while a sauce made from the fresh fruit sauce is used in as a topping for ice cream and cakes, to flavor cheesecake, and in icing. In Paraguay, passionfruit is used to flavor cocktails and yogurts.

Around the schools the raw fruit is sold ready to drink with a straw in it to suck the juices and seeds.  It is used to flavor soft drinks in South Africa. In Vietnam, honey and ice are combined with the juice to make a cool smoothie. While in Thailand, curries are cooked with the baby shoots. While in Puerto Rico it is widely believed to both lower blood pressure and used as a mild sedative.